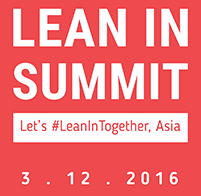 3rd, COSMO CEO and President, Kumi Sato, spoke at the Lean In Asia Summit 2016 in Kuala Lumpur, Malaysia. The event was organized by Lean In Malaysia and several other Lean In circles across Asia, including Lean In Tokyo. Lean In is a nonprofit organization and online community founded by Facebook COO Sheryl Sandberg, to empower women in the workplace and broader society, with dozens of Lean In circles across the globe working locally to advance the status of women.

Ms. Sato spoke on a panel about her own personal story as a female business leader in Japan, and how other women can achieve similar success. She describes the challenges in running a company and raising three children at the same time and how she overcame them. She encouraged women to “stay in the game”, that all women should be able to have both a successful career and a family, but that women in Asia need to come back to work after having a child because as long as women are not present in business, especially in managerial positions, office cultures will not change, thus making any external governmental reforms less effective in bringing gender equality in society. She suggested ways to achieve this in her talk and hoped that as more women remained in the labor force in Asia, norms will shift towards equality.